Discover stories and histories of Althorp

The Spencer Sweet Pea, which startled the horticultural world when first exhibited in 1901, was first cultivated at Althorp by Silas Cole…

Gardener and Head Gardener for 36 years

Dying soon after retirement in 2004,  in old age, Peter looked back on his time at the Estate… 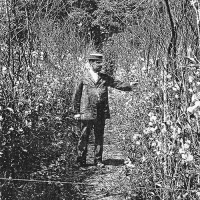 In a letter written in 1911, Silas Cole, Head Gardener to the Fifth Earl Spencer, relates the story of the sweet pea.

“Being very fond of sweet peas, I turned my attention to them in 1898. That summer I crossed the variety Lovely with Triumph, saved the seed and the following year 1899 there were two or three promising seedlings, the rest being rubbish.

The good ones I crossed with Prima Donna and the next season that was 1900 there was one plant among the seedlings much stronger than any of the other varieties. That proved to be the original Countess Spencer. I just managed to save five seeds – one pod only.

The following spring, after sowing them, I lost three of them in one night through mice. The stock was then reduced to two plants but from them I saved 90 seeds. It was from these plants I exhibited at the old Royal Aquarium for the first time.

In 1902 I sowed all the seeds, every one came true but owing to it being a wet summer I only managed to save 3,000 seeds. 2,200 of these were sent in 1903 to America to be grown for stock by Mr Sydenham. Those that came back from America were a mixture of all sorts but no more like my true Countess Spencer than night is like day.” 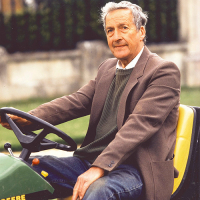 PETER GIRLING: Gardener and Head Gardener at Althorp for 36 years

“I first came to Althorp on 7th September 1959, employed by the 7th Earl to grow flowers and to look after the roses and shrubs and to keep the grounds tidy. I followed a gardener who had been here for fifty years. I had a retired woodman to help me for five mornings a week for about five years and I was then on my own until 1994 when another gardener was taken on to help with the modernisation. I had a Dennis motor mower with seat, for cutting lawns for ten years, and only hooks and shears. The five big beds at the back of the House were roses; red, pink, red, golden, red. In the garden in front of the House I planted herbs, I grew dahlias from seed for a few years and also took cuttings from ivy and geraniums and most other sorts of geraniums.

Countess Spencer, who was my boss, bought a small glasshouse. It was heated throughout the winter by an oil heater. The Countess used to like geraniums in the lead tank and all the vases. I used to grow sweet peas in the drying ground.

It was very tough when I first came. Only one side was cultivated by the ‘odd’ Ian from the House. I dug enough ground to have two rows for sweet peas which the Countess used to like to come herself to cut. Also, there I used to grow a thousand wallflowers each year. In the summer the plants were mainly dahlias, which grew from seed in the small glasshouse. Sometimes the Countess would buy antirrhinums and petunias for the six beds. Also on the House wall there was a wisteria at the courtyard and, an ornamental vine, and a scallion.

When I came to work at Althorp the seven-acre kitchen garden at the top of the Park was partly in use. There was a line of lean-to glasshouses for cucumbers, tomatoes and flowers. There were rows of frames and a carnation house, which had been discontinued. Some of the garden was still being cultivated. After nearly two years it was closed and most of the tools were brought down for my use, such as hoes, forks, and spades. It was taken on commercially by two lots of people at intervals, but was not successful and so it was closed altogether.

A few years after, all the glasshouses were demolished. I remember going to the apple orchard with Lady Spencer in her Morris Minor, just above the kitchen garden, to gather apples. It was not long before that too was demolished. In the walled garden there were plaques to the memory of three gardeners, killed in the First World War. They are now on a wall not far from the House. It was much quieter in those days, the House being renovated for about seven years. After that it was open on Bank Holidays, and for a few weeks each year. The 7th Earl Spencer bought covers for ladies’ stiletto heeled shoes, so they would not damage the floors.

The first job each day is to record the previous days’ weather. It was in progress long before I came to Althorp. Also to wind the clock twice weekly. The tennis court was very run down when I arrived – we used to use it as a fire heap dump. It was not long after the 8th Earl arrived that it was redeveloped. Where the swimming pool is now used to be long grass, shrubs and trees. Most of the daffodils and narcissus were in the ground before I came, but in the 7th Earl’s time I planted narcissus and daffodils for a few years each December.

I first had a strimmer under the 8th Earl. I have a photograph with it, which was taken by him. The five big rose beds at the back of the House had been in for many years, and had bindweed growing in them. It got worse and we could not control it amongst all the roses, so we had them out and replaced them with heathers and junipers. By the time the 8th Earl arrived the six beds in the front of the House had been planted with roses. In the lead tank and vases were plants that I grew at home from seed. When I first came to Althorp some of the chains around the cricket outfield, and part of the cricket pavilion, were still there. The rest had been taken down in the 7th Earl’s time.

When the 8th Earl arrived I was asked to start a square again for playing cricket. I started it from rough grass with an area of about 30 yards square, it progressed from there. When the 9th Earl arrived I had an Allett motor mower which the 7th Earl had purchased for me for five hundred pounds. I used it for twenty seasons before it finally broke down. After that we purchased a sit-on rotary but it was not strong enough for the work involved. From then on we had many modern implements including a sit-on triple mower. Recently there has been much more development in the garden.”

Please fill in your details and we will respond in due course.